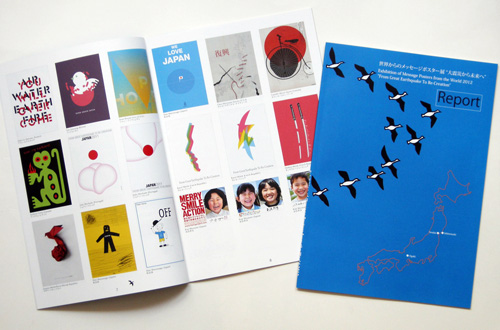 Fly to Tohoku, the Message Posters from the World!

On March 11, 2011 the disaster of the East Japan Great Earthquake occurred.? Many designers sent us emails worrying about the safety of the museum and staffs and pictures of works of their shocks on the calamity.? They really moved us with their sympathy, and in May we thought the victims of the stricken area should look at the message posters for encouragement and asked the designers to send us works under the theme of “from Great Earthquake to Re-Creation”.? Yet we simultaneously had a concern how the people in Tohoku could really see the posters or if the designers would understand our haute-couture-like request and produce the posters.? We anyhow did send them a message, and surprisingly enough we received 111 posters from 70 designers in 19 countries.
We exhibited them twice at our museum on October 22 through December 22, 2011 for the first invitation and on January 25 through April 27, 2012 for the second.? We were further able to post them on the Internet.
Next thing to do was a survey on how and where to display them in Tohoku area.? One of my students, Norifumi Haneda, is a resident of Sendai city and a teacher of English at Kouyoudai junior high school in Sendai municipality.? I asked him for a possibility of holding an exhibition, and got his instant and unexpected answer “It’s positive”.? I was lucky and started preparation with him quickly for one exhibition at Kouyoudai junior high in March and the other at Ishinomaki Senshu University in April.
Kouyoudai junior high school is located in the northern height of Sendai, and was heavily damaged with craze on the building and crack in the ground by the earthquake.? The exhibition was held there on March 1 through 23 and when I visited the school on March 1, the cliff was under the construction of restoration.? I was offered a chance of giving the students of 4 classes in 3rd grade an art of appreciation of posters.? I wanted them to understand the messages embedded in the posters rather than to watch them just hung.? The place of display was a hall where students were passing by.? I felt the distance between the posters and viewers was closer than in museum and this worked out very well.? Given a bit of hint for appreciation, the students tried hard to read the meaning of each poster.? I further sensed the rich internal flexibility and elasticity in them.? The exhibition was open for the local residents as well and busy with the friends and acquaintances the students and teachers called up.
Ishinomaki Senshu University is located in a corner of Ishinomaki downtown and was hired? during the turmoil as a place of refugee, a camping ground of volunteer workers, and a base station of rescue operation by Self Defense Force.? The campus consists of modern buildings and a spacious lawn ground.? The exhibition was held in a corner of the grand library on April 2 through 27, 2012.? The stricken area in the city has been cleaned to a vacant lot after the debris by tsunami were removed and the unusable automobiles are piled up along the seashore.? Houses and shops that were partially destroyed are still left neglected even after one year later.? There are several buildings constructed for temporary housing around the university building.
The meeting of commemorative lecture was held on April 17 when the students and teachers read carefully and shared the messages by the designers who were watching us attentively in the world corners.? We exchanged opinions afterwards in such a significant ambience.
It was our big pleasure to hold such exhibitions together with the people in Tohoku.? We want to thank all the graphic designers on the globe for their full support by sending us the works so readily under the theme of “the encouragement to the victims and the stricken areas with the expectations for reconstruction and future restoration”.